Who Are Foreman & Wilms?

Mr. Foreman and a deadly Puff Adder in Southern Africa.

Short answer: They’re a couple of travelers and wildlife enthusiasts who have a shared love of outdoor recreation, who both possess something resembling senses of humour, and also happen to enjoy making films and sharing them.

The long answer: Mr. Foreman hails from a small town in Western Australia. He developed a lust for adventure and a healthy curiosity for nature at a young age. Whether it was exploring the hills and riverbeds behind his hometown, trekking one of the great

tracks of Australia, tackling the Gunbarrell Highway on motorbike, or backpacking through Papua New Guinea, Mr. Foreman has never been one to stay inactive for very long.

At the age of 25, he moved to Alice Springs in the Northern Territory – the Red Centre of Australia – where he found his calling; tour guiding provided an outlet for his voluminous knowledge and boundless enthusiasm.

When he was not guiding, Gavin found that the surrounding areas were rife with excitement and enchantment just waiting to be discovered. He often set out in search of hidden rock art or unique experiences, always keen to flirt a little with danger.

Gavin’s background is in tour leading.

After 6 years exposing tourists to the wonders of Uluru, Kings Canyon and other Red Centre highlights, Mr. Foreman moved to Darwin and began guiding around Kakadu National Park, an experience he relished. Four years later, in 2005, the opportunity to practice this passion of his with an overlanding safari company in Africa presented itself. 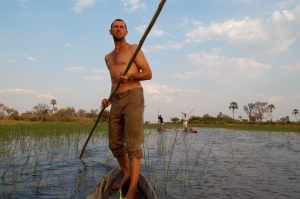 every weekend boating, hiking, or traveling.

Summer’s life-long love of animals led her to a career as an animal trainer and care specialist, with special certification in avian care. Within that field, Summer’s roles included working with exotic animals who were trained to perform in films and photo shoots, working

as a care-specialist in a busy animal shelter, and working  for an aviculturist.

Summer’s background is in animal care and training.

At age 15, Summer caught a chronic case of the travel bug when she attended a 2-week “Save the Rainforest” trip to

Honduras. Nearly 60 countries later and a cure for the affliction is nowhere in sight. This love of travel has found Summer living months in a remote corner of the Ecuadorian Amazon, she has helped

A friendly rosella helps Summer check her e-mail along the Bibulmun Track in Western Australia.

scientists track jaguars in the Brazilian Pantanal, traveled the Great Lakes and Eastern Seaboard of the US and Canada in a power boat, and has multiple times taken her to a place that has always had a special magnetism for her: Africa.

It was on a trip to East Africa, where Summer was spending a few months volunteering her animal care skills to the Kenya Wildlife Service and Nairobi

Animal Orphanage that fate intervened and the paths of Foreman and Wilms converged. It was just as Gavin was celebrating his second anniversary

of working as an overland safari guide that Summer’s four-month stint in East Africa unexpectedly turned into a nearly 5-year affair with the Dark Continent.

Foreman & Wilms at their wedding reception.

Gavin and Summer’s shared love of travel, wildlife and birding, photography, filmmaking, and each other seemed destined to be a remarkable and wonderful partnership. 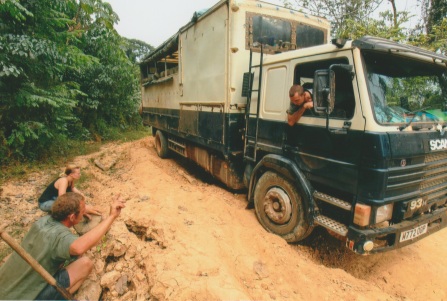 Gavin and Summer continued as co-tour leaders with the company Mr. Foreman had been working for, taking travelers to more than 25 countries in Africa and theMiddle East, until 2011. Their tours included an “Ultimate Trans-Africa”

journey,which started in Gibraltar and traversed down the western side of the African continent, then turned around in Cape Town, South Africa and snaked up the eastern side, through to Egypt, Jordan, Syria, and finally ended in Istanbul, Turkey 10 months (44 weeks) after commencing the journey.

A bushfire erupts on the Canning Stock Route.

After leaving Africa, the couple resided in Western Australia. In 2015, they relocated to California where Summer works in wildlife rehabilitation and Mr. Foreman is a ranch hand when they aren’t filming. Plenty more adventures in North America, Australia, and beyond are expected.

Foreman and Wilms over the years.